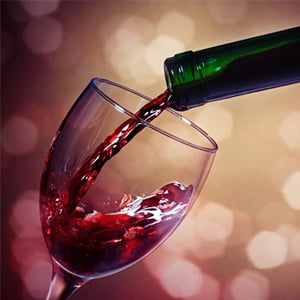 ALL ABOUT RED WINE

Many people do not know that the juice that is produced from the vast majority of red grape varieties such as Cabernet Sauvignon, Merlot, Pinot Noir, Tempranillo, Sangiovese, Malbec etc is original white/light green colour and changes after the maceration of the grape skins with the liquid. One exception is the Saperavi variety, endemic to Georgia, which is a Teinturier variety that naturally produces a red/purple juice. You can find an excellent natural example of Saperavi here
Natural red wines are produced in many countries around the world from hundreds of different types and grape varieties. Some varieties are better acclimatised to colder regions such as Bordeaux, Champagne, Gascony, Alsace, many German regions, Galicia, Georgian wines and most English wines.

Other types of red wine grapes are found in warmer climates such as Tempranillo in Spain, Primitivo in Italy, Grenache in the South of France and Spain, Syrah/Shiraz along Mediterranean regions and El Pais in Chile.

The varieties traditionally cultivated in these regions are reflected in their respective appellation standards; for example, Bordeaux wines will be made from either Cabernet Sauvignon, Merlot, Cabernet Franc, Petit Verdot, Malbec or Carmenere. Other varieties, even ones that can be grown within the terror of a certain appellation, will need to be bottled as table wines.

With all red wine, once the fermentation process is finished, the winemaker makes a decision as to whether to age it. Red natural wine is mainly aged in oak barrels however it can also be aged in Amphora vessels, cement tanks, stainless steel or even fibreglass. Each vessel will be chosen by the winemaker specifically for the type of grape and the particular red wine profile that is desired. In many cases, the ageing period is relatively short in order to allow the inherent character of the grape to express itself.

There are a relatively small number of sparkling red wines, however, there are some examples, especially of petillant naturel (pet’nat) otherwise known as the ancestral method.

The main differences in producing natural red wine in comparison to conventional red wine is that the grapes used in natural wines are all cultivated organically and/or biodynamically. Furthermore, the vinification process is done without the addition of external substances such as commercial yeast, acids, sugar, colourants, thickeners etc.

Many natural wines are unfiltered or very lightly filtered which produces red wine with a higher level of flavonols, a known antioxidant.

HERE IS A LIST OF SOME OF THE MORE POPULAR GRAPE VARIETIES USED TO MAKE RED WINE: